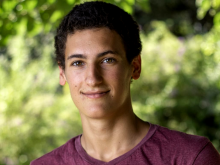 Hilel Garmi, 19 year-old conscientious objector from Israel, has been imprisoned again for his refusal to serve in the army. On 16 October, Garmi was sentenced to 20 more days in military prison. This is Garmi's fifth imprisonment at the end of which he will have spent 77days in total behind bars.

Hilel Garmi was first imprisoned on 29 July, six days after he failed to report at the induction center and undergo enlistment. He was arrested by plainclothes soldiers at his home - an exceptional action by the Israeli army which hasn't been seen in recent years. Following his release, Garmi repeated his refusal and imprisoned multiple times for his conscientious objection.

In his declaration Garmi says:

I cannot enlist, because from a very young age I was educated to believe that all humans are equal.  I do not believe in some common denominator which all Jews share and which sets them apart from Arabs.  I do not believe that I should be treated differently from a child born in Gaza or in Jenin, and I do not believe that the sorrows or the happiness of any of us are more important than those of anyone else.  …As a person who was born into the more powerful side of the hierarchy between the Mediterranean and the Jordan River, I was given the power as well as the obligation to try to fight that hierarchy.

As well as filling in our email alert, please send your solidarity messages to Garmi via the online form of Mesarvot (solidarity network of conscientious objectors refusing to serve in the Israeli military for political reasons).

You can also write to Israel's embassies abroad. Find a list of these here .

War Resisters' International calls for the immediate release of all conscientious objectors. Refusing to kill is not a crime.