Thailand: charges dropped against Netiwit and his fellow protesters 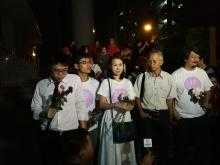 Thank you to everyone who sent our CO-Alert on Wednesday protesting the trial of thirty nine peaceful protesters in Thailand, including conscientious objector Netiwit Chotiphatphaisal. They had been charged either with sedition or with violating bans on public assembly in a rally against the military government in January.

On Thursday they turned themselves in to the police and admitted charges of unlawful assembly. They were released unconditionally. Netiwit reports feeling really relieved at having the threat of imprisonment lifted!