In May 2017, US vendors of weapons made by German company Heckler and Koch received a letter purporting to be from Martin Obermann, the company's head of Transatlantic Sales, informing them of a mass recall of the weapons. The letter read,

As part of our company's new responsibility policy we hereby inform you that Heckler & Koch, as of May 1st 2017, has ceased the supply of firearms to the domestic market in the United States of America.... Owing to the rise of firearm-related deaths in your country in conjunction with the threat of ongoing civil unrest and a highly volatile foreign policy under the administration of President Donald Trump, the German headquarters no longer deems the USA a safe destination country for weapons exports."

The letter offered a website and phone number, which was answered by a woman claiming to be Martin Obermann's secretary, and offered advice on surrendering weapons. 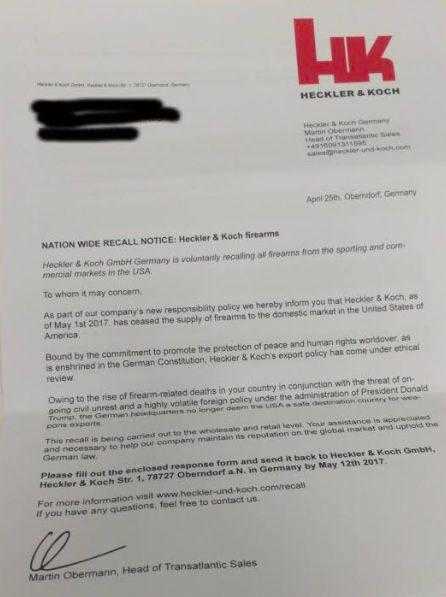 Martin Obermann, however, doesn't exist, and the website was a clever fake. The letters were sent by the Peng Collective, an activist group based in Germany using a "concoction of activism, hacking and art". The letters were sent to raise awareness of the massive profiteering from violence in the USA, where over 100,000 people are killed or injured by guns each year.

As well as the Heckler & Koch prank, Peng Collective also convinced some media outlets that members of Angela Merkel's party, the Christian Democratic Union (CDU) had called for the party to return to it's Christian roots by campaigning against the sale of small arms, and presenting the president of German arms manufacturer ThyssenKrupp Marine System with the "French-German Peace Prize", which the company said they would have "gladly accepted a German-French peace prize, because we are supplying an important contribution to the safety and freedom of Europe with the building of marine ships.”