Seven peace activists from USA were convicted for their protest on the Kings Bay nuclear submarine base in Georgia (USA) last year. The date for their sentencing hearing has not been set yet. The peace activists may face up to 25 years in jail. To support them via a global petition and get more information see here: https://kingsbayplowshares7.org 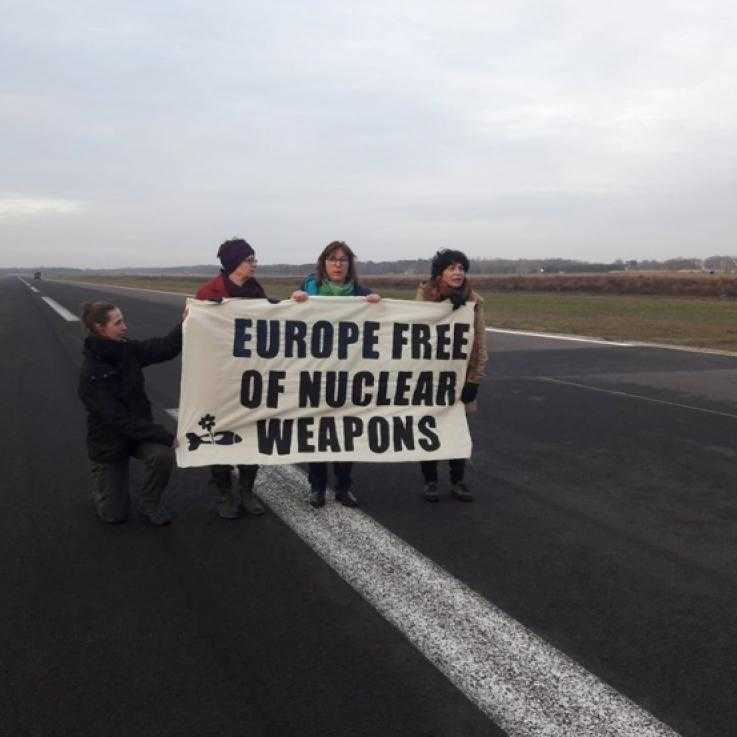 Members of the European Parliament joined members of Agir Pour la Paix, one of WRI's Belgian affiliates, in occupying the runway of the Kleine-Brogel military base, in protest of the ongoing siting of US nuclear missiles there, one month ahead of a NATO summit in Brussels. 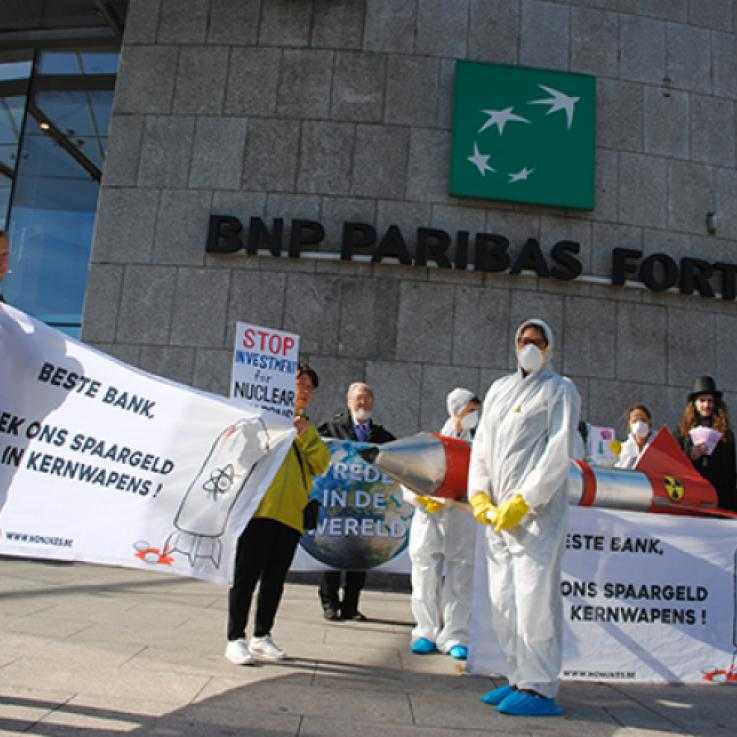 On the International Day for the Total Elimination of Nuclear Weapons (26 September), Belgian peace groups took action against the BNP Paribas bank, because of their investments in nuclear weapons. 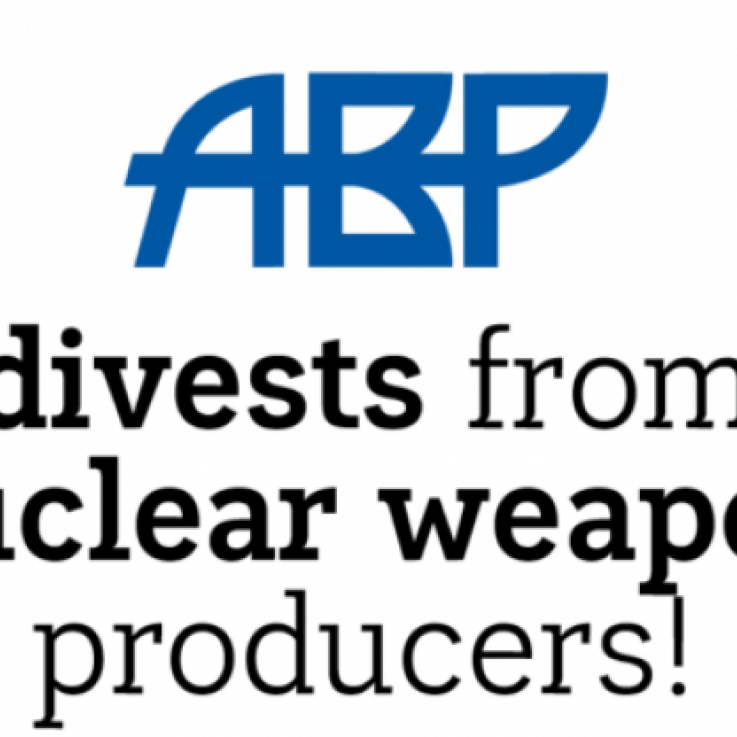 ABP – Netherland's largest pension provider – has decided to end it's it's investments in companies that produce nuclear weapons, as well as investments in the tobacco industry.

War Profiteer of the Month: Moog 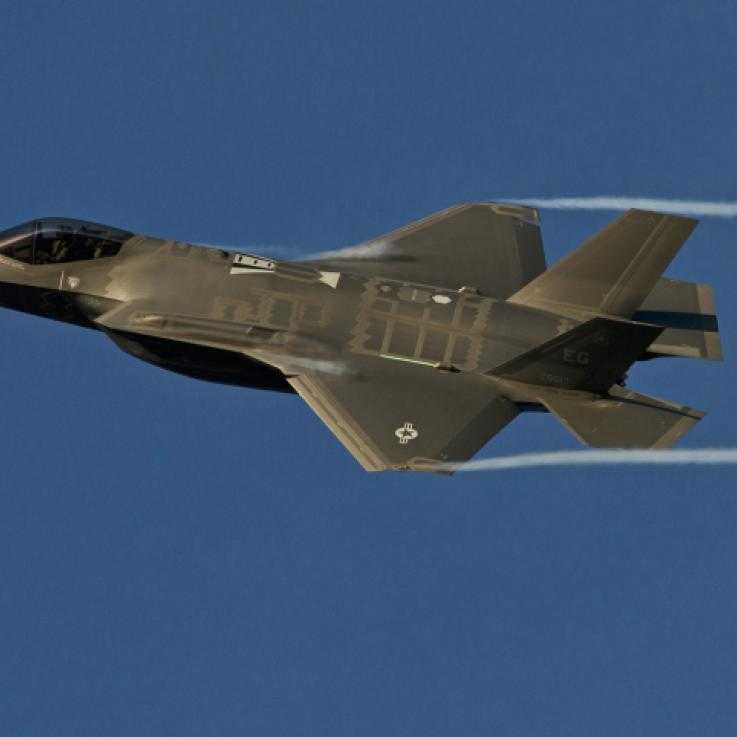 Moog Inc. is a large weapons manufacturer, specialising in hi-tech systems for a range of military and civilian purposes. According to the SIPRI, the Stockholm International Peace Research Institute, Moog is the world’s 83rd biggest arms company. 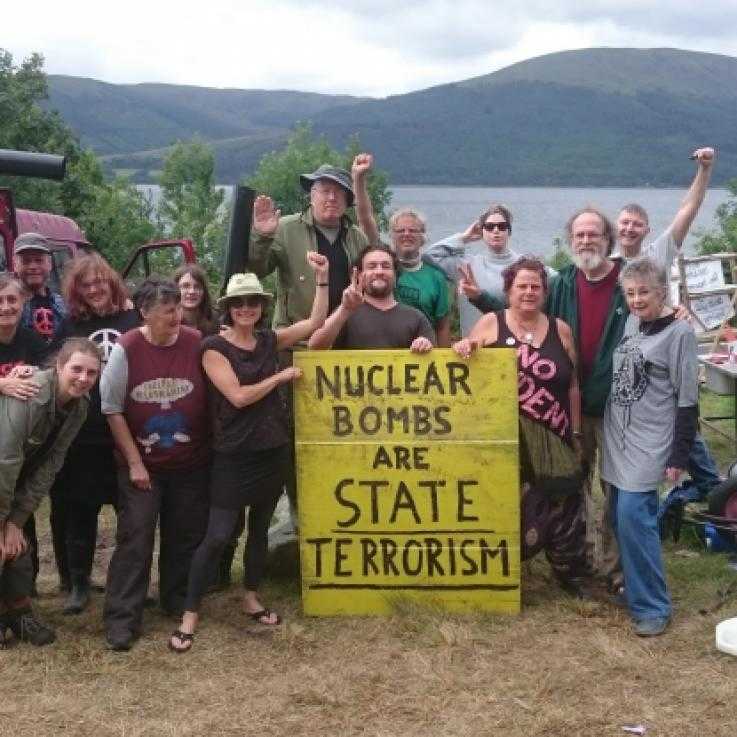 In early July, following years of campaigning from anti-nuclear activists, the United Nations formally adopted a treaty that categorically prohibits nuclear weapons. Read more from the International Campaign to Abolish Nuclear Weapons. This news was met with joy amongst those staying at the Coulport Disarmament camp – run by Trident Ploughshares – who undertook ten days of direct action at the nuclear weapons depot on Loch Long. 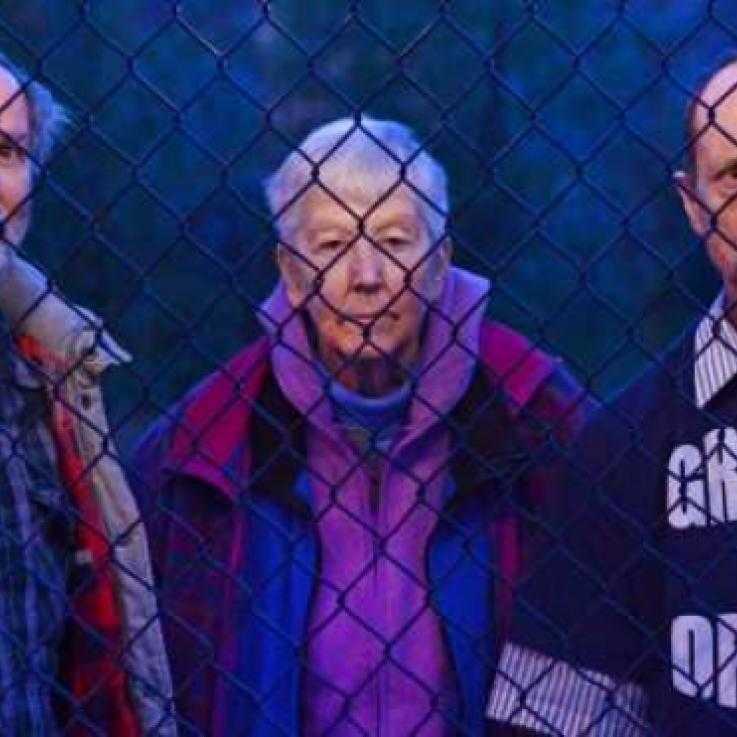 In July of 2012 three disarmament activists in the United States - Greg Boertje-Obed, Megan Rice and Michael Walli - engaged in a nonviolent direct action they dubbed "Transform Now Plowshares" at Oak Ridge, TN's Y12 National Security Complex. Oak Ridge is a site dating back to the beginning of the Manhattan project during World War II and remains an essential link in the nuclear weapons production capability of the US. The three were able to traverse the terrain of the Federal reservation during the night, overcome four security fences, and confront the Highly Enriched Uranium Maintenance Facility (HEUMF) - a repository for 400 metric tons of bomb-grade uranium, enough for 10,000 nuclear weapons. Once there they marked the area with crime scene tape, unfurled peace banners and marked the walls of the building with human blood and spray-painted biblical peace messages.

With the parliamentary approval of the renewal of the UK's “Trident” nuclear weapons system, British activists working for nuclear disarmament and peace are looking for a new way forward.

In the UK, WRI affiliate Trident Ploughshares have held a month of nonviolent action against the construction of nuclear weapons at Burghfield Atomic Weapons Establishment. WRI affiliates from Finland, Germany and Belgium joined Trident Ploughshares for an international blockade, which led to the construction gate being blockaded for over ten consecutive days. Other actions included a successful attempt by faith groups to blockade every entrance, and a mad hatters tea party!

Today we're into the third day of a blockade of the Burghfield Atomic Weapons Establishment in Berkshire, Britain.

In 2012, Megan Rice was part of a group that entered the Oakridge National Laborotory in the United States, where nuclear weapons are developed and weapons-grade uranium is stored. The group - called 'Transform Now Plowshares' - hammered on the storage building, dawbed the walls of the storage building with blood and slogans, and hung banners. All three were arrested, and spent two years in prison.

In 2012, Megan Rice was part of a group that entered the Oakridge National Laborotory in the United States, where nuclear weapons are developed and weapons-grade uranium is stored. The group - called 'Transform Now Plowshares' - hammered on the storage building, dawbed the walls of the storage building with blood and slogans, and hung banners. All three were arrested, and spent two years in prison. A detailed written overview of the action can be found here.