WRI statement on the present Israeli assault on Gaza 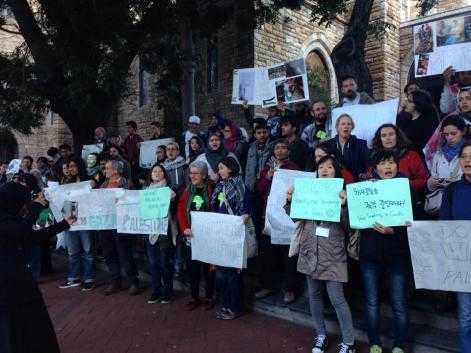 The Assembly of the War Resisters’ International, gathered in the City Hall of Cape Town, South Africa, strongly condemns the ongoing assault by the Israeli military on Palestinians in Gaza and the West Bank. War Resisters’ International considers all war a crime against humanity, and we therefore call for the immediate end of hostilities, and in particular the repeated aggression by the State of Israel against Palestinians.

As opponents of war, we also oppose the causes of war, and stand in solidarity with oppressed people all over the world. We therefore call for the end of the occupation of Palestine and—especially gathered at the building from which Nelson Mandela made his first speech after release from prison—we call for the end of all forms of Apartheid everywhere.

Israel’s apologists present its bombing of Gaza, yet again, as a form of self-defence, or as a mere response to hostilities from the other side. But we consider that this is, rather, a well-planned, precisely timed, assault, undertaken on the back of the dead, wounded, and traumatised civilians on both sides for clear political purposes.

The recent truce agreement between the Fatah and Hamas raised the possibility of a united Palestinian leadership as an adversary to Israel in resistance and a potential partner for peace. We believe it is this possibility that Israel is targeting with this assault, and that it seized on an opportunity to do so presented by the murder, by unknown assailants, of three young men from West Bank colonies. A media campaign was launched around the murder, first presented as a kidnapping, and this campaign provided the necessary pretext for a concentrated attack on Hamas activists throughout the West Bank and for breaking the terms of a relatively long-lasting truce agreement between Israel and Hamas in Gaza. After violating the truce agreement, Israel slowly escalated the bombings in the Gaza strip, until an all-out assault could be carried out, seemingly justified by the rocket fire from Gaza that Israel knowingly provoked.

We firmly believe that the most just and effective way of resistance, even to grave violence, is nonviolent resistance. Therefore, we choose to support those Palestinians and Israelis, as well as international activists, that undertake nonviolent resistance to the illegal occupation of Palestine. We do not support armed violence, whoever uses it, but we support the right of all oppressed people to struggle for their liberation.

We grieve all the dead and grieve for all other victims of this conflict on both sides. We call on the Israeli military and the government it controls to immediately end this assault on Palestine and the occupation that is its root cause.