A CO reflects on receiving cards on Prisoners for Peace day 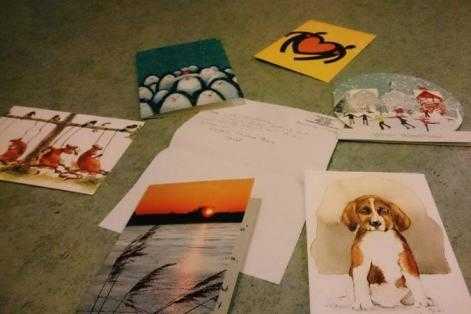 Conscientious objector Visa Savolainen was one of those detained COs who received letters of solidarity in December 2015 on Prisoners for Peace Day. Visa wrote a reflection on his blog on the joy of receiving these.

International Prisoners for Peace Day has been celebrated on December 1st for years. The purpose of the day is to provoke conversation and commemorate peace prisoners with different expressions of support and solidarity.

On Prisoners for Peace Day it is common to send support messages from all around the world for prisoners. Antimilitaristic organizations, communities and private individuals organize these message deliveries.

Today (on December 10th) I also received several postcards and letters from abroad that showed caring, solidarity and support. Although living as a peace prisoner feels unjust, very oppressive, and arbitrary, wide support and abetment makes it easier to cope. It’s a comfort to know that my own actions make a difference. Every conscientious objector's personal suffering has value in this fight for disarmament, equality and peace.

It is comforting to remember that peace activists are a big and diverse group. For example I got a message from 73-year-old activist from England who wrote about their background working for peace. I also got a message from a somewhat younger Swede who got sentenced for civil disobedience in 1996.

I was really delighted and touched to have received so many personal support messages. Many thanks for Lotta in Göteborg, Reinhold in München, Hazel in Wiltshire, anonymous in Wincanton, Gerstner in Liverpool, Susan in Colchester and Miro, Roope, Onerva, Ruka, Tiksu and Esa wherever you are, and for everyone else whose names I couldn’t make out.