Yong-suk Lee refused to serve in the South Korean military based on his opposition to war and violence and was imprisoned from August 2006 to October 2007.  He is a member of the steering committee and a nonviolence trainer at World Without War.  He explains how conscientious objection is making small but significant fissures in the deep militarism of South Korea 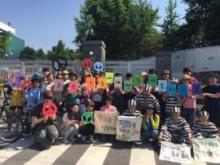 During the past 100 years Korea has endured a countless number of minor and major conflicts. During the first 36 years of the 20th century, Korea was under Japanese imperial rule and many Koreans were, either directly or indirectly,  swept up in the Pacific wars that were waging at the time. With the 2nd   world war at an end and the shackles of colonial rule thrown off, the country became divided in 1950 and with the Korean war escalating into an international one the whole country, north and south, became a battle zone.  Subsequently, continuous waves of small scale regional skirmishes continue to this day. On the one hand during the 1960s and 70s the military dispatched troops on a large scale to participate in the US instigated Vietnam war.  With 350,000 troops dispatched to Vietnam, the South Korean deployment was second only in scale to the US' and this deployment played a significant role in the militarisation of Korean society.  Over the past 100 years the Korean people have on a regular, ongoing basis suffered the effects of many wars such as the Asia-Pacific war, the Korean war, and the Vietnam war, and from the effects of other small scale regional armed conflicts.  Consequently, there is a residual dread of war that remains in the collective consciousness of the Korean people.  Regrettably, Korean civil society has failed in its part of enabling the people to address these real fears in a positive manner and successive Korean governments have been able to exploit that situation by continuing to promote a strong military ‘defence’ as the answer to these fears.

Therefore, with war seemingly always lurking on the horizon, militarism has never been a stranger to Korean society, so much so that it is deeply ingrained in everyday life.  Society has its roots deeply embedded in the political and cultural domains, but also, deep in people's unconscious, there remain strong vestiges of militarism which can be found in many different places throughout society.  Not only is it taboo to criticise military conscription, but it carries a legal penalty also.  Criticism of South Korean military service is perceived as a declaration of support for North Korea.  Military service is the most inefficient, irrational and corrupt institution and the fog of silence that surrounds the issue has only increased.  Those who have exempt status, such as women and men  with disabilities, often suffer from blatant discrimination and in many ways are politely or not so politely marginalised.  As soon as it became known that the son of a ruling party presidential candidate used his father’s influence to avoid military service – a possibility not available to those with less privilege – support for his candidacy collapsed and he was subsequently defeated in the polls.  To utter a word at all about military service is to risk glamorising it.  The way military service is beautifully packaged and presented through the media and on TV programs belies the reality of how the Korean military participated in the massacre of civilians during the Vietnam war and how the 1980 Gwangju student uprising was so violently suppressed with soldiers brutally pointing their guns at innocent civilians, which is never talked about.

Even social movements in Korean society have not been left untouched by the all-powerful force of militarism.  The military has exerted a major influence in terms of the organisation and structure often adopted by the main spheres of influence within the democracy movement, such as the workers' and students' movements, who would elect only men from within the group to undergo military training drills in order to 'best prepare' for confrontations with police in the vanguard.  It was assumed that standing face to face against a strong foe and engaging in fierce struggle was indispensable and any calls for democracy within the group itself were dismissed.  Nonviolence gave the impression of weakness or surrender whereas violence was seen as necessary for genuine social change.

It therefore became unimaginable that, in such a strongly militaristic society, anybody would even consider objecting to military service.  Although living conditions in the military were notoriously difficult, it would be extremely rare for anybody to conscientiously object to military service among those subject to recruitment, including those in the democracy movement.  Prior to 2000 the only group who systematically and conscientiously objected to conscription were the Jehovah’s Witnesses, and because they were considered strange, likewise this strange behaviour of theirs was also dismissed as bizarre.  Of course, it cannot be definitively said that there were absolutely no other conscientious objections.  Disclosure of military corruption by whistle blowers was not unknown and neither were desertions by policemen as a result of violent crackdowns by fellow riot police on civilians.  In such cases, the demands made were political, but far from objecting to the military as an institution, what was actually requested in many cases was a better military.

It was from 2000 that conscientious objection began as a movement.  As of 1945, with liberation, conscientious objection had never been pursued openly.  Those who declared themselves conscientious objectors left themselves open to ridicule and verbal abuse and conscientious objection as a movement, while voicing opposition to militarism, had at the same time to defend itself against mounting criticism.  It was forced to compromise in the face of an increasingly militarised society and declare either ‘we respect the consciences of people who enlist into the military’ or ‘we are not opposed to the military per se but believe there should be an alternative “community” service for people who object to military service’ was another rallying cry.  Despite this limitation, people could now openly declare their objection and criticise the military and this was becoming a gradual trend.  Although the numbers were still miniscule, young people began to question and agonise more about joining the military and soon their numbers were increasing.  The feminist and environmental movements together with the conscientious objection movement have played an important role in helping diminish the influence of militarism in society.  These ‘new’ social movements have also helped expose the limitations of previous social movements (working class and democracy movements) in the way they used to disregard issues they didn’t consider worthy of debate.  For instance, the hierarchical structures, reminiscent of the military, which existed within social movements meant that a democratic/consensus decision making model almost always had to defer to a high-handed top-down approach.  These criticisms seem to be unique to Korean society but the new generation who have had no experience of military dictatorship have relatively no problems in embracing these new movements.

As of 2000, then, there was an undeniable feeling that society was at the cusp of a new era which had at last thrown off the shackles of military dictatorship.  However, it was also undeniable that although conscientious objection had barely made a dent in the impregnable fortress that is militarism in South Korean society, it was a very significant fissure and was growing.

Korea is undeniably a country where militarism is strong but recent disturbing cases of violent deaths in the military have helped change social attitudes and perceptions.  A number of high profile cases including one of a soldier going on a shooting spree killing fellow troops in revenge for persistent bullying and a subsequent manhunt, and another case of incessant violent abuse of a defenceless soldier who was subjected to relentless bullying by fellow troops which eventually led to his death has served to undermine the already tainted reputation of the military within Korean society.  It seems that gone are the days when conscientious objection as a movement perceived its role as solely to protect the rights of the person against a negative societal backlash.  It is now however a movement that is very much at the forefront of promoting a myriad different peace related issues.  Although an alternative ‘community’ service is still not in existence there is no doubt that the small dent left by conscientious  objection in the side of the behemoth that is South Korean militarism is getting bigger.  The diversity of voices that comprise the peace movement and conscientious objection in Korea continue to provide a strong challenge to militarism and this is very much a work in progress.

Go to next chapter: The Conscientious Objection Movement, Militarism & Gender in Turkey