Hannah Brock details some of the 'constructive programmes' which conscientious objection movements have historically developed as alternatives to militarist 'solutions' for social problems.1

This can happen both in terms of how the groups organise internally: how they make decisions, what actions they take and their membership.  This might include using consensus decision making, using nonviolent language, ensuring a diversity of gender identities are affirmed, etc.  These are all outward expressions of the internal political approach of the group.  These expressions can also happen in a more public and external way, by initiating activities that productively work outside the violence of the current system as far as possible: showing how it can be done. Gandhians would call such initiatives 'constructive programmes'. 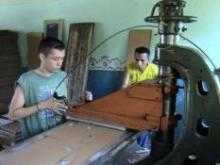 Examples of these programmes include a conscientious objection group in Sincelejo, the capital of the Colombian department of Sucre, in the Caribbean region.  The young people of Sincelejo faced forced recruitment by the state army, rebel groups, and the paramilitary over many years.  Having offered workshops on peace culture, nonviolence, and conscientious objection, in the early 2000s the conscientious objection group recognised that many young people were actually joining armed forces for economic reasons.  They recognised that their role could be in starting economic initiatives so that recruitment did not seem like the only option in order to achieve families' financial stability.  They founded small enterprises, including businesses that produced cartons and boxes, organic vegetables, margarine, t-shirts, and bakery goods, bringing income to them and their families.  The main aims of these efforts were:

•  to prevent the recruitment of youth into armed groups
•  to form a support network to prevent forced recruitment
•  to educate young people in nonviolent methods for resolving conflicts
•  to come up with economic strategies to support their families' needs.2

Other such economic initiatives were surely active in Sincelejo at the time – the conscientious objection group may not have been unique; but the point is that they saw it as their particular priority, with the explicit aim of allowing people to reject the military and other armed groups.  Likewise, in the state of Spain in the late 1970s, instead of undertaking compulsory military service, the first wave of civil objectors (prior to this point the majority of conscientious objectors had been religious) moved to work in impoverished areas.  This made their social alternative easily understandable to a wider public.

Carlos Pérez Barranco, a member of AA-MOC, writes that 'they demanded and created a sort of alternative, self organised civilian service outside of the state conscription mechanisms'.3  Indeed, such constructive programmes are not to be confused with substitute service imposed by the state in lieu of conscription into armed forces.  Some conscientious objection groups do regard this 'alternative service' as a positive contribution to society,4 but autonomous constructive programmes established by conscientious objection groups is a very different thing.  Rather than labour imposed by the state, as an obligatory substitute to time spent in the armed forces, they are entirely self organised, bottom-up initiatives.  Substitute service is often considered to be part of the militarist system, not an alternative to it.  By contrast, work by conscientious objection movements serves to illustrate the realities of a demilitarised society – to show the way.

An example of this also emerges from the British conscientious objection movement in the 1939-1945 war.   In Britain in 1940, Pacifist Service Units were formed by the Peace Pledge Union and the Fellowship of Reconciliation. These units would help people directly affected by the war with advice and practical support. How much such actions were perceived by local people probably depends on who the conscientious objectors were – were they people very different to them, or with much in common?  In this case, groups of conscientious objectors would move into a house in deprived areas of cities including Liverpool, London and Bristol, where they would support people made homeless by bombings.  These groups actually pioneered a particular branch of social work and, after the war, went on to become the Family Service Units, which were still active until 2006 when they were absorbed into the charity Family Action.

Constructive programmes can have impacts on public perception, both in tangibly communicating what kind of world the antimilitarists are trying to create – in actions rather than words - and somehow softening a public that may hitherto see conscientious objectors variously as only a nuisance or threat (many people will, of course, continue to think that and if you are tied to militarism as a solution, then antimilitarists are a 'threat', since we want to break down that structure and build another world). However, such 'public relations' would rarely be the sole point of these initiatives.  As Dr King put it, 'the nonviolent approach does not immediately change the heart of the oppressor. It first does something to the hearts and souls of those committed to it. It gives them new self respect; it calls up resources of strength and courage that they did not know they had.'5  Conscientious objection movements have found the same thing.  The point is not just 'success' in terms of the behavioural or policy or attitudinal change – initiating a constructive programme does not mean militarism will fade this very minute.  But you've actually already changed the world a little bit by organising and living differently within it.  Martin Luther King went on to say that finally nonviolence does 'win' however, since it 'reaches the opponent and so stirs his conscience that reconciliation becomes a reality'.

Finally, ability to undertake such initiatives depends on your capacity. Small movements, whose members are regularly detained or otherwise punished, and who have little external support and few allies, may find it impossible to prioritise anything beyond protecting conscientious objectors, at least at some points in the life of their movement.