International solidarity and the struggle against militarism in Colombia 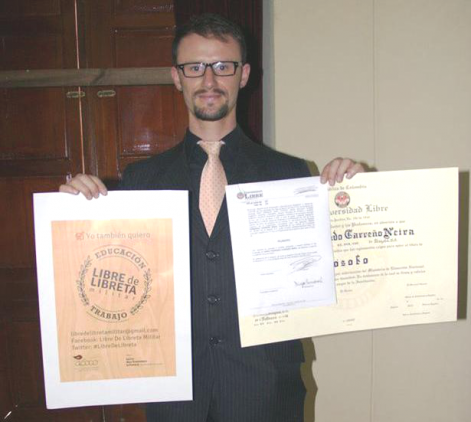 Today, Colombia has an historic opportunity to move beyond an armed conflict that has lasted more than 50 years.

I'm part of Acción Colectiva de Objetores y Objetoras de Conciencia (ACOOC: Colombian Collective Action of Conscientious Objectors), and I'm writing to tell you about the progress antimilitarists in Colombia have made — and to ask you to donate to War Resisters' International so that WRI may continue supporting our struggle.

For the last half century, young people in Colombia have been forced to build their dreams in the middle of a war that has killed more than 220,000 people, seen 27,023 kidnapped, displaced 5.7 million and allowed a long list of systematic human rights violations that have generated horror in society at large. The majority of Colombia's youth have particapated directly or indirectly in the conflict: war seemed the only option.

Peace negotiations between the Colombian government and the Fuerzas Armadas Revolucionarias de Colombia (FARC), and the possible involvement of the Ejército de Liberación Nacional (ELN) guerillas, are an opportunity to overcome armed conflict. However, for conscientious objectors and antimilitarists, it is clear that building a sustainable and lasting peace involves overcoming the structural causes of conflict, including the economic model, the concentration of wealth, land dispossession, social and political violence, patriarchy, poverty, social inequality, and (of course) militarism, amongst other forces.

Colombia remains one of the most militarised countries in the region. The figures are clear: we have the second largest army after Brazil; investment in “security and defence” is approximately 27.4 billion pesos, the second highest in the region (3.4% of GDP); there are 6.5 soldiers per 1,000 people, while there is only 1 doctor for every 3870. Colombia has more people in the armed forces than teachers. We have a surplus of police, but we need 23,800 more physicians.

Militarisation is directly related to the imposition of a neoliberal capitalist economic model that benefits a few at the expense of the many. In this sense, the challenge of demilitarising society is large and complex.

ACOOC understand that this struggle involves designing nonviolent actions for the long and short term that will escalate and deepen the nonviolent and antimilitarist approach, towards social change.

We use nonviolent action in our struggle against conscription, against the libreta militar (the military card you receive on completion of military service – this card determines access to many rights), against illegal recruitment by the Colombian military, and to secure the right to conscientious objection.

In recent years we have made significant progress. Conscientious objection is now recognised as a fundamental right in the constitution; military 'raids' (batidas) – forced recruitment (press gangs as they are called in English) – are now banned (although in reality they still happen), and the libreta militar is no longer needed to gain a degree (see my photo above)!

We are confident that the small gaps we have forced open will clear the way for the deepening of our struggle, and in turn offer us new challenges.

None of this would have been possible without the sustained solidarity of War Resisters' International, who have supported us for the last 15 years. It is so important to strengthen international nonviolent struggle and antimilitarist solidarity.

We invite individuals and organisation who are committed to the prospect of transformation through antimilitarism and nonviolent action to support WRI's work, and make a donation so that WRI's crucial role articulating antimilitarism around the world can continue.

Their collaboration is very important and can make all the difference in contexts such as Colombia.

Thank you in advance and we look forward to receiving your contributions.