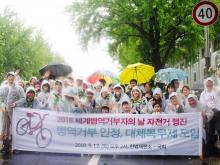 This year, with International Conscientious Objection Day, we particularly draw attention to those who have to leave their countries of origin due to forced recruitment and who are looking for protection in other countries. They are denied the human right of conscientious objection. But to flee from war and forced recruitment is generally not seen as a reason for asylum. Women and men who refuse compulsory recruitment to the military need protection!

The contributions we received from all over the world are varied and colourful, just as varied are the reasons why people from different countries make the decision to refuse war and military service, sometimes at great risk. To date, we have received contributions from Angola, Belgium, Chile, Colombia, Cyprus, Eritrea, Finland, Germany, Greece, Italy, Netherlands, Russia, South Korea, Spain, Switzerland, Turkey, Ukraine, United Kingdom and United States.”

For more updates, follow us on Twitter and Facebook as well as on WRI and Connection e.V.'s websites, and join us tomorrow with your posts on social media with the hashtag #CODay2020.