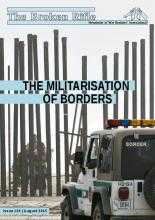 Issue number
103
The militarisation of borders

Editorial | Of militarisation and violence: borders and bordering

London: On my daily way back home I often pass by heavily armed police “safe”guarding citizens, infrastructure, life and economy: in the metro, at the station, always watchful.

Levels of Militarisation: an essay in images

The Walls and Abyssess of Fortress North

The easiness of traveling within the Globalized North for its citizens only equals the difficulty for someone to access this part of the world.

I write this as the results from the Greek referendum on the bailout programme proposed by the Troika (EU, IMF and European Central Bank) make headlines in newspapers and bulletins (July 2015). The resounding NO (oxi) to austerity that the referendum results returned may seem somewhat detached from the concerns of this TBR issue –and yet they are not, in a number of ways.

Violence along the Indo-Bangladesh Border

It has been rightly said that the twentieth century will be remembered as a century of partitions. Partitioned borders that is to say borders produced out of partitions of countries (like Korea, erstwhile divided Germany, India) are violent borders. Military presence marks the borderlands. Partition leads to forced migration - refugee flows and flows of other types like immigrants from stranded minority communities in homelands. Partition also makes the question of return crucial. Do partition refugees have right to return? If they have the right to return, then what is the period within which they will enjoy the right of return to the countries they came from? Also, will there be certain conditions, in as much as we know that there may be forced return. This is the prism in which we can learn the histories of violence, bloodshed, and massive displacement in the erstwhile united Ottoman Empire, Germany, Palestine, Korea, Ireland, and India. These are some of the major events to shape the story of forced migration in the last century.

The South African government’s official policy on borders and immigration is coached in the language of human rights and opening up colonial era boundaries in Africa. But the reality is more authoritarian and brutal – economic migrants and asylum seekers, particularly from other African countries, are regular targets for violent harassment by the police, are illegally denied access to basic services like hospitals or sent to detention facilities. State officials are heavily invested in rhetoric about border security and constantly make ominous statements about foreign threats to the South African homeland, from transnational drug smuggling to rhino poaching. Of course, this is not novel or particular to South Africa. States have historically used physical borders and violence to delineate outsiders from citizens, while also combining military operations outside their territory with domestic policing. This is becoming even more apparent with the modern wars on drugs and terror, in which wars and operations abroad are combined with the extension of surveillance and restrictions on civil liberties.

How is power being exercised through the Apartheid wall in Palestine?

The militarization of borders has occurred since ancient times, and locating 'political' frontiers has been a necessary condition all along, for instance, The Great Wall of China, of which Emperor Qin Shi Huang started its earlier sections In 220 BC as a defensible wall against Northern invasions. In the modern era, we can find several examples of militarized borders, such as the Pakistan / India borders, USA / Mexico, and 'Israel' / Palestine. Actually the obsession with 'frontiers' has developed to an extent that we can now even find 'autonomous' agencies whose aim is managing the cooperation with foreign borders guards, including questions of illegal immigration, human trafficking and 'terrorist infiltration', such as "FRONTEX", the EU border agency, which was established in 2004 (FRONTEX, 2007). In this article, however, I will discuss the Apartheid wall in Palestine.

The water and energy conflict in Central Asia

One of the significant factors impeding the process of integration between Central Asian countries is the question of water and energy resources of this region. The historical prerequisites of the present-day situation go back to the times of the former Soviet Union. In this era, the region relied upon a united water, energy and socio-economic system on an all-union scale; the division of all significant resources, including both water and energy resources from the direction of the so-called Centre - in other words Moscow.

Since the end of the Cold War, the dream of a peace dividend has disappeared as militarisation simply shifts its focus to find new areas of conflict. In the Asia-Pacific region, where nation states are a relatively new feature of history, border disputes have inevitably resurfaced. In the 21st century, it is not only land borders that are the subject of disputes but sea boundaries as nations jockey for control of underwater resources. At the same time, the USA has opted to shit its geostrategic focus from Europe to Asia, and new nations and alliances have emerged, as we have become a multi-polar world rather than one with just two superpowers, then only one. In addition, a number of developing nations are using their new wealth to build up and modernise their armed forces, especially in the Asia-Pacific region.

The European Union (EU) has one of the most dangerous borders in its southern tip, across the coast of the Mediterranean Sea. In recent years, this maritime border, particularly the Italian Peninsula, has become a mass grave of migrants by reason of tragic boat accidents that took place time and again, often times in distances so close to coastal towns that they could have provided timely interventions of rescue. This issue has caused a great deal of embarrassment on the part of some European institutions, as it is happening partly due to lack of an effective intervention strategy on the part of the EU. This points out that legal security and the provisions that safeguard human rights are in stark contrast to the militarised security of the borders.

A Barrier In Between Mexico and the United States: insecurity, poverty and isolation

The 3,169 km of the US-Mexico border line has become an insurmountable, heavily militarised and controlled barrier. The deployment of security forces, border controls and weaponry is very similar to that of two countries in a state of armed tension. There is not a single section of this boundary that is free of steel fences, surveillance cameras, blackhawk helicopters, Predator drones; or border patrol, immigration and customs protection officers, whose presence has doubled in the last six years to reach 25,000 agents.
Read more

Would you like to take action against the militarisation of youth? You can join War Resisters' International's week of action from 14-20 November (as an individual or as a group).