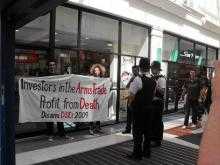 In September every other year London's antimilitarist scene is dominated by DSEi - the Defence Defence Systems & Equipment International, the largest arms fair in Europe. One problem in organising such regular events is that it is virtually impossible to keep the numbers growing every time, and this year numbers were again down. However, the scale of protests is only one criterion for evaluating a campaign, and the anti-DSEi campaign has had important successes - above all when the DSEi's former owner, Reed Elsevier, decided to remove the arms fair from their portfolio because the arms trade was not compatible with their educational interests. However DSEi carries on - its new owners, Clarion Events, don't seem to see any incompatibility between their business and owning an arms fair, and pressure is still needed.

This year DSEi featured over 1,000 arms companies from around the world, displaying arms ranging from rifles to tanks to fighter jets to battleships. They were joined by arms dealers, "trade visitors" and military delegations, including countries involved in conflict and human rights abuses, as well as those with desperately underfunded development needs. Adversaries shopped side-by-side for weapons to use against each other.

This year's most prominent protests were organised by Campaign Against Arms Trade (CAAT) and Disarm DSEi. For the CAAT event, protesters assembled at the Excel Centre in east London, where DSEi takes place, and then two double-decker buses took them to central London to demonstrate in front of UKTI Defence & Security Organisation (UKTI DSO), the government department that promotes UK arms sales. UKTI's aim is "to add value to the UK economy by helping business succeed internationally", devoting 75% of its budget to promoting British exports. Until April 2008 this was meant almost exclusively civil exports, but this year UKTI DSO has taken an active role in organising DSEi, coordinating the presence of Ministry of Defence and military representatives as well as inviting international delegates. UKTI DSO has extended official invitations to 53 countries, including at least 15 where there are armed conflicts and serious human rights abuses. The list includes Algeria, India, Libya and Oman, all places where UKTI DSO reports recent 'high-level political interventions' to help arms companies secure deals.

The main event organised by Disarm DSEi was a tour in the City in London visiting companies with connections to DSEi and the arms trade to show them that we know their connection with the arms trade and to shame them. A similar tour took place earlier the same day by a group of cyclist doing a Critical Mass against DSEi. Companies visited included:

Disarm DSEi has produced a map of all the exhibitors at DSEi, that can be downloaded from
Disarm DSEi tried to involve more climate change activists in the arms fair protests, holding workshops at the last Climate Camp in London to make the connections between the arms industry and global warming. They, like CAAT, are continually thinking about how to convert concern into action, and numbers into pressure. At times, like this, the late Bill Moyer's Movement Action Plan can offer encouragement. This identifies Eight Stages in the Process of Social Movement Success - the fifth stage of which is "Perception of Failure": the high expectations generated by previous powerful actions have not been fulfilled, numbers are down, the powerholders seem to be unchanged and are fighting back. However, in this model, every social movement has to go through this stage before achieving 6: Majority Public Opinion, 7: Success and 8: Expanding the Success!