Amnesty International reports that conscientious objector Halil Savda and three other activists were convicted on 17 June 2010 under Article 318 of the Turkish Penal Code which criminalises ‘alienating the public from military service’. The case was opened against them following their attendance at a public demonstration on 6 January 2010 in support of conscientious objector Enver Aydemir, who had been in military detention since 24 December 2009 for refusing to perform military service, but has been released on 8 June 2010.

Halil Savda, Gökçe Otlu Sevimli, and Zarife Ferda Çakmak were convicted and each received sentences of six months for ‘alienating the public from military service’. Gökçe Otlu Sevimli’s and Zarife Ferda Çakmak’s sentences were suspended for five years due to their lack of previous convictions. In addition to a conviction for ‘alienating the public from military service’, Volkan Sevinç was also convicted for ‘insulting a police officer in the course of their duty’ and sentenced to one year and six months in prison. His sentence was also suspended.

The convictions come despite the public prosecutor requesting their acquittal and declaring that their actions were protected by the right to freedom of expression. Lawyers for the protesters told Amnesty International that they would appeal the judgment.

This is Halil Savda’s second conviction under Article 318 in less than a year. In June 2009 he was convicted and sentenced to five months in prison under the Article as a result of publicly voicing his support for two Israeli conscientious objectors at a demonstration outside the Israeli Embassy in Istanbul in 2007.

Article 318 reads:
"(1) Persons who give incentives or make suggestions or spread propaganda which will have the effect of discouraging people from performing military service shall be sentenced to imprisonment for a term of six months to two years.
(2) If the act is committed through the medium of the press and media, the penalty shall be increased by half."

It is obvious that Article 318 (and previously Article 155) is being used to silence dissent. Any criticism of the Turkish military can potentially lead to prosecution and a prison sentence under Article 318. Thus, an open debate about the role of the military in Turkey's society is almost impossible.

Article 318 stipulates an upper limit of 2 years' imprisonment, and three years in cases where the "crime" is committed via the press. However, in June this year, Article 318 was brought within the compass of the Turkish Anti-Terror-Code, labelling conscientious objection an "organised crime" and "danger", and effectively increasing the potential prison terms up to 4.5 years imprisonment. 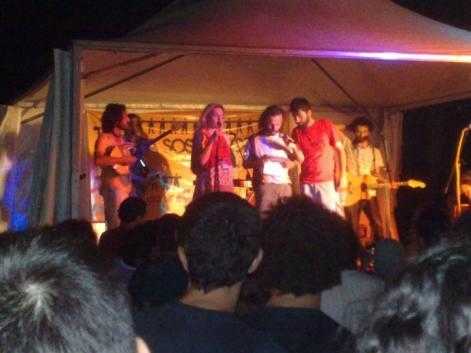 Speaking to the Hürriyet Daily News & Economic Review after his declaration, Yazıcı said the procedures against conscientious objectors are “arbitrary,” adding that he thus did not what measures will be taken against him.

“The state should implement the international agreements it has already ratified that acknowledge the right to conscientious objection,” he said.

There is a strong possibility, however, that Yazıcı will receive a military jail sentence of 10 months for his action, according to his lawyer, Ahmet Ergin.

Şendoğan Yazıcı re-declared his conscientious objection during the concert of the Turkish group 'Bandista' at the European Social Forum in Istanbul, which took place from 1-5 July.