On 19th May, peace activists in Belgium took direct action at the arms company Advionics in Oostkamp, They climbed onto the roof of the company, put up banners and set up their tents. With their action they denounced the export of arms to Saudi Arabia, and demanded that the Flemish government fixes the loopholes in the Flemish arms export laws.

The Flemish Peace Institute, an independent research institute, has revealed that the Saudi Eurofighter fighter jets are equipped with radars produced by Advionics. Initially, these were exported to Germany, but they ended up in Saudi Arabia. The Flemish government didn't have any knowledge about the final destination of the radars.

“The radars produced by Advionics are being used to bomb Yemen. The Saudi led coalition bombs hospitals, refugee camps and other infrastructure. It's horrid that Flemish weapons are being used in such a conflict. We refuse to leave this roof until the Flemish government stops exporting these weapons”, said one of the activists. 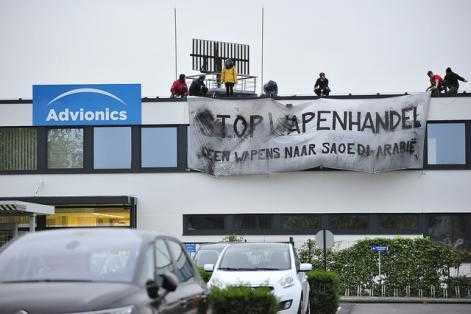 Flemish arms: nobody knows who's using them

“All considerations regarding security, peace and human rights are neglected to the benefit of economic profit,” says Bram Vranken from Vredesactie. “The Saudi use of the radars produced by Advionics is a poignant example of the consequences of such a policy.”

In January minister-president Bourgeois said it is very unlikely that any weapons will be exported to Saudi Arabia in the future. The minister president bluffs.

“Officially the Flemish government doesn't export any arms to Saudi Arabia. Everybody agrees this is a bad idea, including minister-president Bourgeois,” says Bram Vranken from Vredesactie. “Research shows however components produced by Advionics are ending up in Saudi Arabia. Without a fundamental revision of the arms trade decree Bourgeois cannot even keep his own promises.”

One of the activists on the roof says: “It's completely irresponsible to export weapons without even knowing where they will end up. The arms trade does not lead to a safer Europe in a safer world. On the contrary, the conflicts in the Middle East are fuelled by our weapons. This has to stop immediately.”