This land does not belong to us

"This land does not belong to us. We belong to this land". This quote is from an interview with Hadassah Froman, in relation to her late husband – Rabbi Menachem Froman of the settlement1 of Tekoa next to Bethlehem in the West Bank.

My name is Arni. I was born in Israel and so were my parents. My grandparents immigrated here from eastern Europe in the 1930's when the Nazi regime gained power in Germany. For more than five years, I served in the Israeli air force as an intelligence officer. After travelling the world and opening up to new ideas and world views, I decided to commit myself to bringing peace - both inner and outer. Specifically in Israel - Palestine. This of course led to me to leave my military unit as a reserve officer, and to start researching the social and environmental issues that are at the root of most wars.

For the last year and a half I have been part of a grass-root project called "EcoMe" which is short for "Ecological Middle- East". The project is located next to Jericho in the West Bank, specifically so that Palestinians can have access to it, since they need special permits to enter the Israeli side of the wall. The project tries to bring together Palestinians, Israelis and internationals to meet and do 'peace work' with relation to the land – the connection of all of us to mother earth, and more specifically to the piece of land some call Palestine, and others call Israel, and all of us see it as our home.

The project was established on December 15th 2010, as five professionals from the fields of environmental and outdoor education, ecological architecture, permaculture, renewable energy and inter-cultural group facilitation committed to launching the project EcoME Centre.

EcoME is an intercultural living experiment, devoted to gathering and sharing peace knowledge, exploring sustainable ways of living environmentally, socially and spiritually. It is a place in which we wish to explore living in a holistic way, approaching peace work from multiple levels. 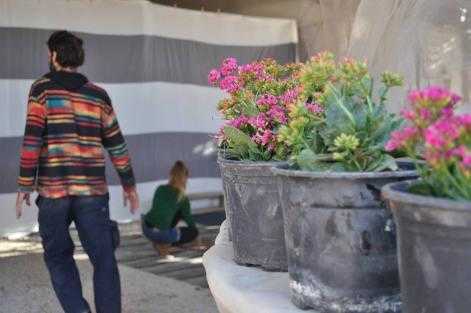 There are about ten friends living there currently - men and women, and sometimes children, Israeli, Palestinian, German, Swedish and Kenyan, in addition to 5-10 changing volunteers from all over the world. We offer workshops, trainings, gatherings, desert trips and community processes that bring together Palestinians, Israelis and internationals. Our workshops include: Non-Violent communication, language immersion intensive courses, Yoga and other body-mind practice, permaculture, arts and more.

I decided to open with the quote of Rabbi Forman because I think that one of the most profound ideas that this project wishes to bring is that the land does not belong to us. Not to the Israelis, nor to the Palestinians. Not even to human beings. The land was here before us, and will stay here billions of years after we are gone. The most important question is what we do with it while we are here? Are we fighting over the resources and trying to gain as much control to "our" people, or are we trying to take care of her, heal her, to harmonise with her and all the other living being that are dwelling with us on this land.

It is possible to see some of these values in the rules we decided to have in Ecome. Few simple rules which are meant to create as much inclusiveness to most of the people and animals living around us. The rules are:

1. Ecome is an alcohol and drug free space

3. The kitchen is vegetarian; do not bring any kind of meat

4. Please be aware of the cultural differences and be sensitive to it with your clothes and with touching other people.

These rules are meant to create inclusiveness, although in some sense they are excluding different people and cultures of course. It is important to understand the Muslim and Jewish traditional culture so that you can relate to it.

The 'no weapon' rule is a very strong rule at our place, and it is meant to create some kind of equality between the people. Since the Israeli Jews are highly armed society, while for Palestinians it is forbidden and dangerous to carry guns or even knives, we try with this rule to eliminate some of the inequality created through military force around us. It does not make sense that an Israeli and a Palestinian will have a Non-Violent Communication course together, while one of them is carrying a gun. Of course it does not eliminate the asymmetrical use of weapons between Israelis and Palestinians in general, but it does address the asymmetry in this context.

The other rule which we can learn from is of the "no meat" policy. Palestinian and Israeli mainstream societies are regular meat consumers. For us to say that meat is not permitted in Ecome is somewhat strange for many people. When they ask why, we explain the holistic view of peace work, as well as other reasons such as Kosher and Halal problems concerning meat, and also the environmental impact of meat production and consumption.

The lack of water that many Palestinians are experiencing (due to political reasons) cannot be disconnected from the fact that the production of 1 kilo of cow meat consumes about 15,000 litres of water. If we want to create a reality in which the resources are enough for everyone, we cannot continue consuming in such irresponsible manner and we must be aware of the consequences of our actions.

It is very hard to convince people of these ideas whilst around us the military is continuing to control the people, the combat jets are roaring above us, and the religions and food corporations are asking us to continue consuming meat.

Yesterday when I was giving a tour around Ecome to a Palestinian man he shouted at me – "how can you talk about being vegetarian and not to kill the chickens, when outside of here your soldiers are killing us?" I looked at him with compassion and thought he was right. And at the same time I thought to myself, that as long as we use force to control and kill animals just because they are weaker and innocent, we will probably continue to do it to each other. 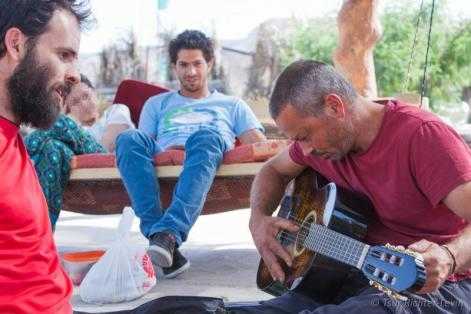 To turn a militarised society into a more peaceful and non-violent society might take many more decades. In the meantime we can use the gifts of the earth, and our connection to her, to remind us that we should not fight over the land, but work together to renew her and share fairly the abundance we have. In Ecome we try to implement this approach with success to some extent, in the hope that other places and projects will connect to the same ideas, and promote a radical change in our social and environmental reality.

I will finish with another quote, this time from a priest: "We must learn to live together as brothers, or perish together as fools" – Martin Luther king Jr.

1 A Jewish Israeli city or village, built on Palestinian land that was occupied by Israel in the 1967 war. They are illegal under international law.