#Refuse2Occupy: International Day of Action for COs in Israel 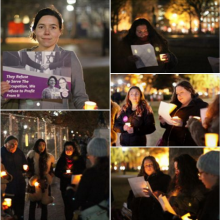 On 1st December Prisoners for Peace day this year, actions took place across many different countries in solidarity with Israili conscientious objectors Tamar Alon and Tamar Ze'evi, who were imprisoned for refusing to be part of the occupation and to serve in the Israeli army. Many activists across different countries took actions to support Tamar and Tamar and push their governments to stop profiting from military occupation.

As part of the day of action, 22 vigils took place in countries including the UK, Italy, Belgium, France, the US, Cyprus, Greece and Finland, where activists showed their solidarity with Tamar and Tamar, and called on their governments to stop arming the Israeli occupation. 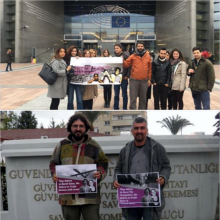 Tamar Alon and Tamar Ze'evi were imprisoned again following the tribunal on 12th December, and were sentenced to 27 days in military prison for their refusal to serve in the army. Click here and send your protest emails to the Israeli authorities to show your solidarity with Tamar and Tamar. 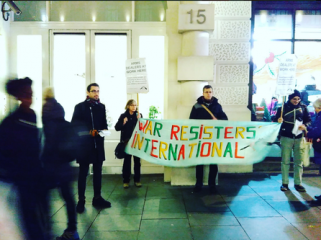