Turkey: Stop the cycle of violence! 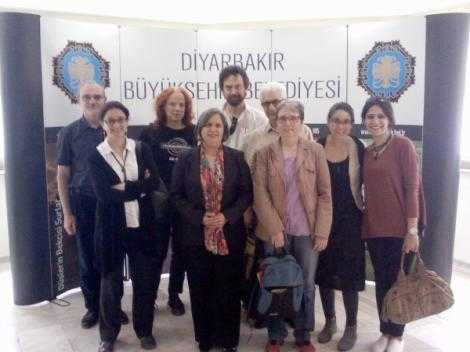 “Europe has failed us”, is the bitter statement often heard in South East Turkey currently. “We thought that Europe stood for human rights and peace, but unlike when there was war in Turkey in the 1990s, nowadays nobody cares what is happening to us”. An international delegation has visited South East Turkey. The group – organised by international pacifist network War Resisters' International - concluded that the violent conflict between Turkey and the Kurdish PKK has caused enormous suffering and traumatisation among the civilian population of the Kurdish regions of Turkey. According to reports, since August 2015 at least 338 civilians and an unknown number of combatants have died, and more than 400,000 civilians had to flee their homes. According to the Human Rights Foundation of Turkey, about 100,000 of these people have no houses to go back to since their residences were totally destroyed.

“We have seen parts of towns destroyed that reminded us of pictures from neighbouring Syria. We have seen bulldozers flattening ruins while old women were searching among the debris for remnants of their belongings. And we saw parts of the historical city of Diyarbakir hermetically closed of by police barriers, with nobody knowing what is happening behind the barriers”, reported Chair of War Resisters' International, Dr. Christine Schweitzer.

War Resisters' International is an international network of antimilitarist and pacifist groups of more than 40 countries. The delegation consisted of five international members from four different countries and two Turkish human rights activists. Its purpose was to assess the situation in the conflict-afflicted areas of Turkey and to see what the international nonviolence movement could do to help partners in Turkey in their efforts to protect human rights and to promote a peace process.

“We met with several Turkish and Kurdish human rights organisations. They all told us about numerous human rights violations and war crimes committed by the Turkish Military and Special Forces. There were snipers targeting civilians in the street, hospitals closed and turned into military barracks or police stations, access to health denied, and humanitarian workers threatened and killed“, said Rudi Friedrich, the Secretary of the German NGO Connection e.V., an organisation that works for more than 20 years on Turkey, mostly supporting conscientious objectors from that country. "But some of them told us as well about a strategy of PKK which endangered the civil population."

“I have been to many conflict zones”, so Dr. Stellan Vinthagen from Sweden, who is a professor for Resistance Studies in the United States. “The terrible thing here is that the conflict is not even recognised as a war. There is a dominant aggressor and oppressor on one side. They call it their actions 'fighting terrorism', and take that as an excuse to not respect international humanitarian law. On the other side, there is a subordinated group that uses violence. We have heard reports of fighters preventing civilians from leaving the conflict zone, using them and their houses as shields.”

“The protection of civilians is the duty of any government in the world. Failing to do so creates an atmosphere of impunity that must not be tolerated. That goes also for any political movement. If they say that they are fighting for 'their people', they must protect them, not endanger them" says Michaela Söllinger from the Austrian Fellowship of Reconciliation Austria, who has worked as a nonviolent protective accompanier for human rights activists in Guatemala and Colombia.

War Resisters' International believes that violence never is a solution. “While we have doubts about the so-called ‘solution process’ that collapsed in July 2015, in the end a solution to the numerous problems will have to be negotiated between all parties involved”, says Andreas Speck, a nonviolent activist living in Spain and is active with the Andalucian Antimilitarist and Nonviolent Network and who has worked with antimilitarist and nonviolent groups in Turkey for more than 20 years. “What is urgently needed is a genuine peace process, accompanied by confidence building measures involving both sides”, he continues. “It does not help to put obstacles before such a peace process – be it the government demanding that PKK first put down their arms, or be it that PKK demands autonomy as an outcome of such a process. A genuine peace process requires that both sides open their minds, but also that other actors, especially civil society, are involved in finding a solution to the conflicts that respects the social and cultural rights of Kurdish people and all communities living in the region.”

Following its visit, War Resisters’ International will work with its contacts in the region to develop nonviolent responses to the armed conflict.

War Resisters‘ International has, together with other peace organizations, started two petitions to call the governments of Europe to not longer ignore the situation in Turkey:

More information can be found on: http://stopthecycleofviolence.wri-irg.org