This month, activists from different European countries met in London as part of a WRI training on countering youth militarisation and its gendered dimensions.

The gathering was held on 2-4 February, and included activists from AKL (Union of Conscientious Objectors) and Committee of 100 from Finland, Nesehnuti from Czech Republic, DFG-VK and BSV from Germany, Movimento Nonviolento from Italy, Centre Delàs from Catalonia, and the Peace Pledge Union and ForcesWatch from the UK. 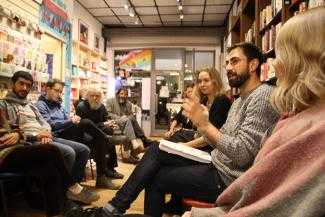 During the training, activists took part in various activities exploring how military values are promoted to young people, in which ways this militarisation is gendered, and how we can plan effective strategies countering these forces. The gathering was supported by the UK-based Network for Social Change and the facilitators network Turning the Tide.

Following the training, War Resisters' International hosted a public forum on countering youth militarisation in different countries. The forum, held in Housmans Bookshop in London on 5th February, was joined by activists from the Czech Republic, Finland, Turkey and the UK. During the event, Hana Svačinková of Nesehnuti explained how the military influences education in Czech schools via the Ministry of Defence programme called POKOS (read more about POKOS here), and Minna Vähäsalo of Committee of 100 and Matias Kaskiluoto of AKL explained the role of conscription in the militarisation of Finnish society, as well as the problems conscientious objectors face in Finland today. Read a report by Peace News on our event here.