The Flash-ball weapon was originally designed and built by a French company called Verney-Carron. The Flash-ball a “less-lethal” weapon designed for police and security forces as a less-lethal alternative when responding to individuals with knives and other weapons. The weapon is notable for its use by police in response to protests and riots, and also appears to be available to civilians (the “Flash-ball compact” is described on the company’s website as “designed for private use” and a number of videos on YouTube suggest the weapon has ben acquired by civilians).

The Flash-ball was originally introduced in 1990 and has been through a number of different versions.  in a range of formats, and can be used with a range of ammunition, but primarily 44mm balls made from rubber or condensed foam, which are effective at up to 30m, but often used at much closer range. The company claims that the gun has the stopping power (i.e. the ability of a firearm to stop a target) equivalent to a .38mm handgun (or “a Mike Tyson knock-out punch from up to 10 meters”), or, as described by Laurent Thines, neurosurgeon and chief clinician at Besançon teaching hospital, as “like having a 20 kilograms of concrete block thrown on to your face or head from one meter”. The company claims that as well as the French police they have 37 other clients, including Russia, the United States and 16 other countries in the European Union.

The company used their presence at MiliPol 2015 – an arms fair focused on “internal state security” attended by countries all over the world - to introduce the Flash-ball Super Pro.

The weapon is considered “less-lethal”, partly because it lacks the kinetic energy needed to penetrate the body and is designed to incapacitate, not kill. However, a wide range of life-changing injuries have been attributed to the weapon, including losing eyes, fingers or whole hands, being left in comas, and at least one death – Mustapha Ziana was killed by police in 2010 after being shot with a Flash-ball from 4.4m.

Flash-ball is a registered trademark of a French company called Verney-Carron, but it is also used as a generic term for other similar weapons, such as the LBD40 produced by the Swiss company Brügger & Thomet, formed in 1991. The LBD-40 is larger than the original Flash-ball, with a longer range, and as well as firing a 40mm rubber round, it appears it can also be used with foam bullets, and tear canisters. Brügger & Thomet also produce a wide range of rifles, extendable batons, handcuffs, knives, and tools for breaching doors.

Alsetex is a French company specialising in “pyrotechnic systems and services”, marketed to police and security forces. There is relatively little information publicly available on the company, with a limited website. However, the company’s products are used by the French police, including stun grenades such as the GLI-F4, also known as the SAE 810, a tear gas and stun grenade containing 25g of TNT and 10g of powdered CS gas, and has been used extensively against the Gilet Jaunes movement. 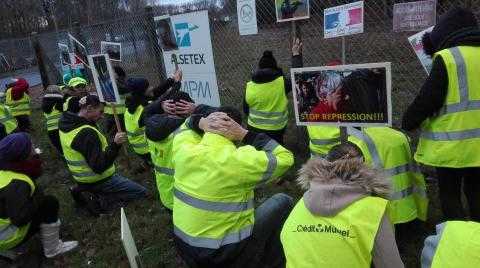 In March, a large group of Gilet Jaunes activists gathered at the Alsetex factory in Pont-de-Buis-lès-Quimerch, to protest the company’s products being used against their movement.

Flash-ball weapons have been used heavily against the Gilets Jaunes movement in France with activists using twitter to document injuries caused by the weapon. Journalists have alleged that the weapon has been misused, documenting evidence of police threatening protesters and journalists at very close range with the weapon.

Olivier Béziade, was shot in the head with a riot gun during a protest on 12 January, and was left in a coma for several days. Video at the time showed Béziade running from police before being shot in the head and collapsing.

An activist collective has documented nearly 100 cases of serious injuries during the Gilet Jaunes protests, including at least 15 people losing eyes to rubber bullets. In 2017 a human rights organisation called for the weapon to be banned, and in January 2019 medical professionals launched a petition demanding a ban on the use of the Flash-ball.

Serious injuries have also been caused by GLI-F4 grenades, including protesters losing hands when grenades have exploded nearby.