War Resisters’ International office, together with Connection e.V. released a number of videos by conscientious objectors (COs) and their supporters, celebrating CO Day, sharing their stories and solidarity messages.

This year, we drew particular attention to those who have had to leave their country of origin due to forced recruitment, and who are looking for protection in other countries. Among others, the video contributions included messages from COs who are in exile, who had to flee their countries due to their refusal to war and forced recruitment, and seeking protection from persecution in another country.

You can watch all videos here on our Youtube channel Refuse to Kill. We will keep updating the content beyond the CO Day. 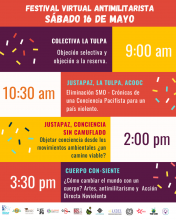 In Colombia, a coalition of antimilitarist and CO organisations, including Cuerpo Con-siente, Justapaz, CONOVA, BDS-Colombia, ACOOC, among others, held a two-day Virtual Antimilitarist Festival on 15th-16th May. The event was live on Justapaz’s Facebook page. You can watch one of the recorded sessions here. You can find all other sessions on Justapaz’s facebook page.

In addition, the Kolectivo Antimilitarista de Medellín and La tulpa organised an online forum on education in nonviolence and antimilitarism, which was broadcast live on the Escuela de Experiencias Vivas Facebook page and here https://www.pluriversonarrativo.com/.

In Germany, activists from local groups of DFG-VK (Frankfurt and Offenbach), Connection e.V. and Pro Asyl organised a gathering in Frankfurt (Hauptwache) to call for asylum for conscientious objectors and deserters. They 'constructed' the slogan „Conscientious Objectors and Deserters need Ayslum“ by means of modular components. See here for photos.

Activists from DFG-VK (northern groups) held a vigil at the military airfield of Jagel nearby Schleswig (Schleswig-Holstein), holding banners for conscientious objectors and criticising Germany's involvement in numerous wars abroad. The activity took place in the framework of a regional networking meeting with discussions on how to organise counter-recruitment work under the new circumstances of Covid-19.

In Greece, Amnesty International Greece released a video with conscientious objectors from  Cyprus, Greece, Israel and Turkey. You can watch it here.

In South Korea, World without War, together with refugee rights and transgender rights groups, hosted an online 'talk-show' for the CO Day. The event highlighted and criticised how the refugee screening, transgender gender correction screening, and conscientious objector screening processes are militarised. You can see it here (in Korean).

In Turkey, Conscientious Objection Association organised an online workshop with a live broadcast on Youtube. The event covered frequently asked questions by the followers of the Association, informing conscientious objectors, draft evaders and deserters about their rights in law. The recorded video of the broadcast (in Turkish) can be seen here.

In addition, a conscientious objector from Turkey declared his refusal to perform military service and released his statement on the same day. You can read it here (in Turkish).

In Ukraine, Ukrainian Pacifist Movement (UPM), who recently joined WRI network, hosted a webinar, the Right to Refuse to Kill in Ukraine. The main language of the event was Ukrainian, but UPM activists provided additional information in English. You can find their seminar slides here. Follow their Facebook page here. 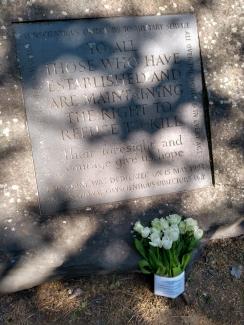 In the UK, a coalition of British peace organisations hosted the International Conscientious Objectors’ Day online ceremony including a minute's silence, songs and speeches on past and present experiences of conscientious objection (including a speaker from Network of Eritrean Women). As part of the ceremony, some activists laid flowers at the International Conscientious Objectors' Memorial Stone. Find more information here on Peace Pledge Union’s website.

In Scotland, a group of peace organisations hosted an online vigil, including stories of COs from the First and Second World Wars told by their descendants, profiles of contemporary COs and an update on work in support of COs at the UN. You can watch the recorded session here.

In Leicester, Leicester CND, Soka Gakkai, Community of Christ and other faith groups hosted an online event called 'All voices for peace'. The event included stories of conscientious objectors from different faith and ideological backgrounds from around the world.

In Sheffield, the Sheffield Socialist Choir performed a song online, written by Janet Wood has marking International Conscientious Objection Day. You can listen to the song here.

The British actor and playwright Michael Mears launched a video version of his moving play, This Evil Thing, about Britain's First World War COs. You can watch the play on Youtube here.

In the USA, San Diego Veterans For Peace and the Peace Resource Center Interactive Panel organised an online panel, Celebrating 4000 Years of Conscientious Objection. The event examined conscientious objection today in our attempts to “live by our conscience in a state dedicated to ongoing wars and aggression."

﻿Also in the USA, in Sherborn, Massachusetts, activists laid flowers at the memorial stone for Unknown Civilians Killed in War, and held a period of silence shared in honour of the enormous contribution conscientious objectors have made throughout the world.