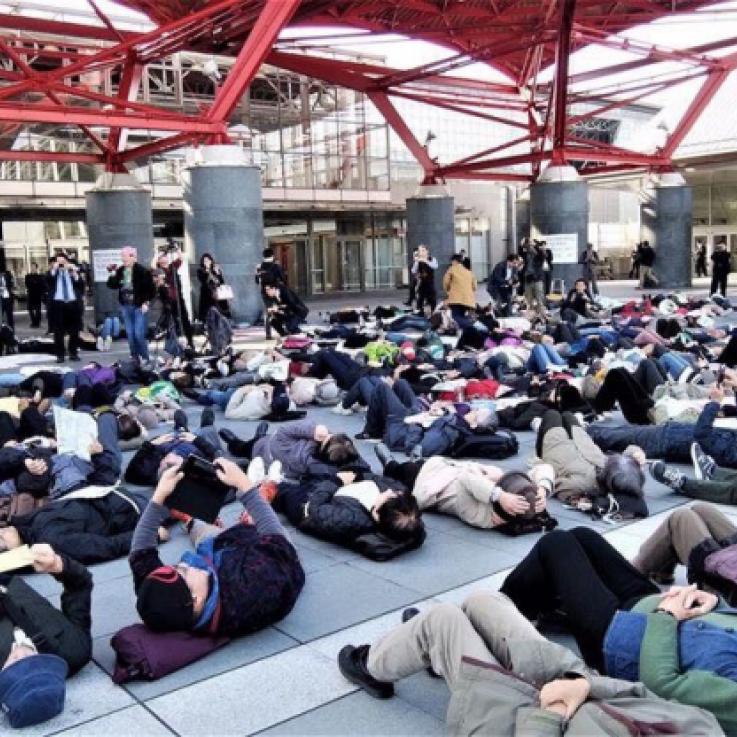 A new arms fair taking place in Japan has been met by protests from peace groups. The fair, called DSEI Japan, was held in Chiba City, near Tokyo, from the 18th to the 20th November.

Last week the Japanese Parliament approved bills allowing the Japanese military to engage in overseas combat in limited circumstances. This is the first reinterpretation of the 1946 constitutional that renounced war and outlawed it as a means of settling international disputes. The bills sparked massive demonstrations in Tokyo streets in recent months and physical altercations in parliament this week – the largest in 50+ years, at around 120,000 people.

On Monday 13th April, groups across the world took action on military spending. The Global Day of Action on Military Spending (GDAMS) is now in it's fifth year, and WRI affiliates took action to highlight the huge amounts of money that are wasted on military expenditure across the globe.

In Finland, two WRI affiliates came together to display a banner reading "If we had $1.8 trillion, we'd would #movethemoney to education, renewable energy, healthcare" in multiple languages. Members of South Korean group World Without War are currently touring Europe, met with members of AKL (the Union of Conscientious Objectors), and took part in the action.

War Resisters International, a ninety-three year old antiwar/pacifist organization, after having gathered from over 60 countries at its Quadrennial conference in Cape Town, South Africa, expresses its deep sorrow over the self-immolation on 29 June of the Japanese man, and its deeper sorrow over the cause of that drastic action.

In the wake of the terrible suffering in Hiroshima and Nagasaki as victims of the world's first, and to date only, use of nuclear weapons in war, the Japanese adopted as Article 9 of their Constitution a prohibition against maintaining army for deployment outside the country's borders.

It seems to us terrible and tragic that, knowing what it collectively knows, Japan is now facing the repudiation of Article 9's prohibition on overseas war, and we entreat the nation and its legislators to reject this move, and maintain Article 9 as a beacon of nonviolence and non-aggression for the rest of the world.

On Behalf of the WRI assembly

Okinawa, the southernmost prefecture of Japan, consisting of some 160 islands with a population of approximately 1.4 million, is known as kichi no shima or military base islands. While Okinawa consists of only 0.6% of all the Japanese landmass, 74% of US military bases in Japan are concentrated in the prefecture. At present, further militarisation of Okinawa is taking place and Okinawan people are putting up a stern opposition to it. With a brief background of the militarisation of Okinawa, I would like to highlight two recent developments: the construction of a US military airport in the Henoko/Oura Bay area and the construction of six helipads at Takae in Yanbaru Forest.

Japan and the arms trade

The huge engineering and technological might of Japan may be poised for a new lease of life as the country prepares to ditch a self-imposed ban on arms exports that was introduced in the mid-1970s.

The controversial decision, which is likely to encounter bitter opposition from the country's mainly pacifist middle classes, could deliver significant economic benefits to Japan and lead to a realignment in the global defence industry.

conscription does not exist

According to art. 9 of the 1947 Constitution Japan is not allowed to have armed forces: "Aspiring sincerely to an international peace based on justice and order, the Japanese people forever renounce war as a sovereign right of the nation and the threat or use of force as means of settling international disputes. In order to accomplish the aim of the preceding paragraph, land sea and air forces, as well as other war potential, will never be maintained.

Korea, annexed as a colony in 1910, suffered under oppressive Japanese rule until the end of World War II. During that time there were many acts of repression against the Korean people, no single example of which was more severe or massive than the forcible drafting of Korean women for sexual service to Japanese troops located throughout the Asia-Pacific area. The euphemistic term by which these women were known is translated into English as ‘comfort women’ (or girls).