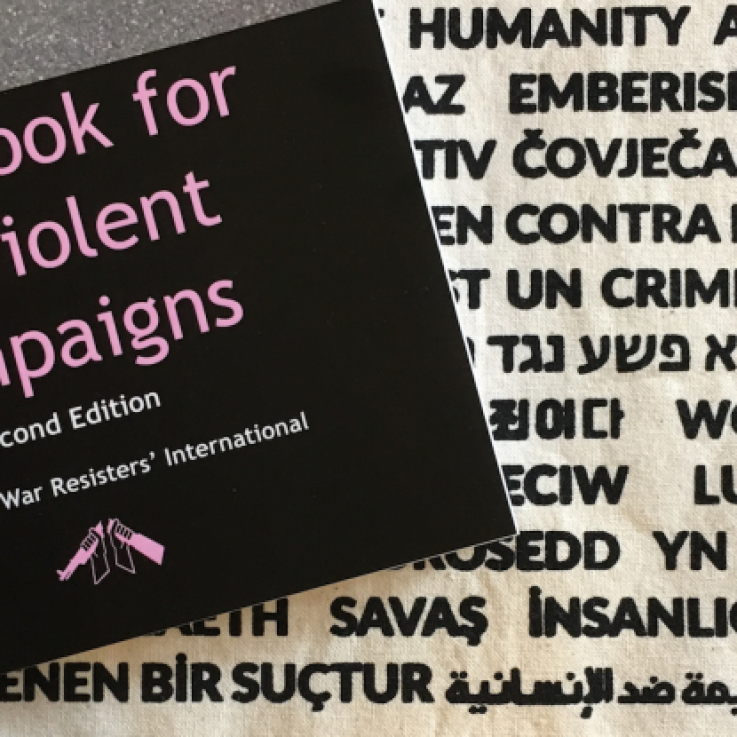 In September 2017, thousands of arms dealers will descend on London to market their wares to militaries from across the globe. Defence and Security Equipment International (DSEI) - is one of the biggest arms fairs in the world, and it takes place in east London every two years, exporting death and destruction around the world.

We are the international resistance to DSEI, and we need your help.
Read more 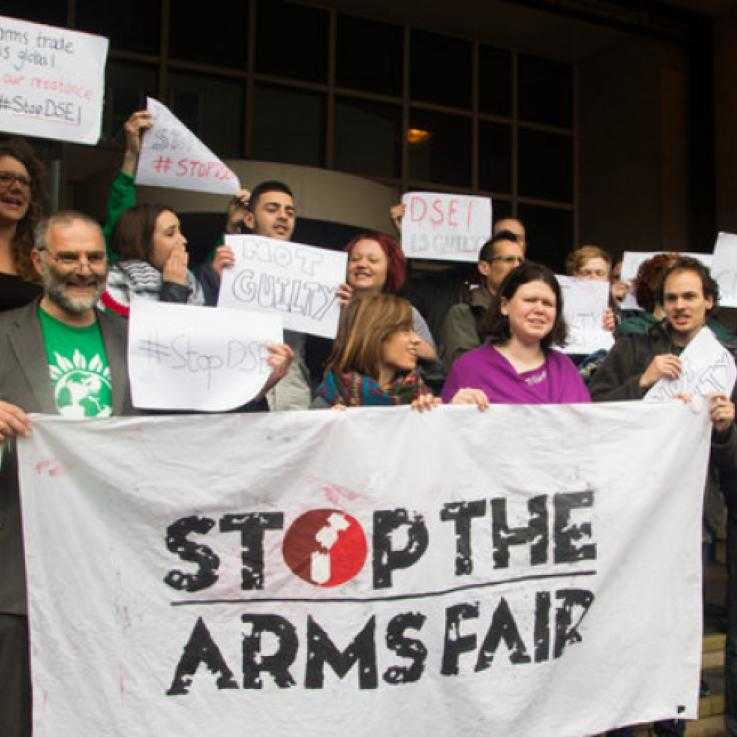 This year's WRI Council meeting will take place in London in September, coinciding with DSEI - Defence & Security Equipment International - the biggest arms fair in the world. We will take part in actions before and after Council to disrupt the fair.

UK activists: see how you can help international activists to stop DSEI!

The schedule for our events is as follows:

War Profiteers News is a bi-monthly round up of news and activism against war profiteering. The June edition featured nonviolent activism from around the world against the arms trade, exploitation of natural resources, and profiting from occupied territories. You can read the articles here: /en/publications/war_profiteers and sign up to recieve the email newsletter in your inbox here: http://lists.wri-irg.org/sympa/subscribe/warprofiteersnews
Read more

This week the Eurosatory arms fair is taking place in Paris. The 'Defence and Security' fair, one of the largest in the world, takes place every two years. For many years, opposition to Eurosatory took the form of one woman, Yvonna Kressman, faithfully standing outside on her own, over decades.

The 'Stop Blood Coal' campaign is run by PAX in the Netherlands, targetting the Drummond and Prodeco (the Colombian subsidiary of Switzerland-based Glencore) mining companies. The campaign aims to expose and challenge the links between paramilitary violence and coal mining in Colombia, support communities in their search for truth and reconciliation, and pressure European energy companies to take action against their suppliers accused of human rights abuses.
Read more

Pacifists in Europe will be travelling to Paris in June to protest the Eurosatory arms fair. Some will travel as part of a pilgrimage from Germany, via Strasbourg and arms factories. There will be actions on train stations as delegates arrive, vigils, and a demonstration on Tuesday 14th June at 6.30pm at Les Invalides. Follow @noneurosatory on twitter and sign their petition online. Also this week in Wales, activists have been disrupting the Defence Procurement, Research, Technology and Exportability Fair in Cardiff. The event was previously held in nearby Bristol, but had to be moved because of protests here. Find photos here.

Read more, or write to noneurosatory2@gmail.com for more info...

The rise in mercenaries fighting on the front line in conflict zones in Africa and the Middle East is a frightening return of the ‘Dogs of War’, according to a new report published by War on Want.

Tahoe Resources is a Canadian mining company. In mid-2010, Tahoe acquired the Escobal mine in southeast Guatemala from Goldcorp; Escobal is a 'high grade silver' mine, and also contains gold, lead and zinc. Some analysts believe it to be one of the biggest silver mines in the world. The Escobal mine is approximately 40km southeast of Guatemala City, and 3km from San Rafael los Flores.

Reflections from Stopping the War Business

At the end of the Stopping the War Business international seminar, three participants shared their reflections from the meeting. Here they are below.

It's good to be in South Korea. I'm from a country which still maintains conscription and I've used half of my life working with issues related to conscientious objection. That is one reason why it feels so special to be in Seoul, as I've heard so much about the campaings that our South Korean friends have been doing here.

Anyway, war profiteering is not the strongest area of my knowledge so I've learned a lot during this seminar. Thanks for the really interesting keynote speakers as well as workshops!

The Stopping the War Business seminar was held in Seoul, Republic of Korea, on 16 and 17 October, 2015. It was co­hosted by World Without War and War Resisters' International. The seminar provided space for learning about effective tactics used to challenge war profiteers around the world, and forged relationships between campaigners that will inform and enable new campaigns from here onwards. Activists from 21 different countries took part, with 70 participants in total (30 internationals, and 40 Koreans).

Quote from the evaluation: 'I came back with a big bag of knowledge and experiences from different regions that I would very much like to spread the information in my country'

After the seminar, a nonviolence training and then action against the ADEX arms fair took place. The seminar and the actions were deliberately linked, in order to support local activists in their struggle against a local example of war profiteering, and to put the learnings and relationships built up during the seminar into action.

Hannah Brock gives us an historical example of objection to war profiteering which conscientious objection movements today could emulate.1

The introduction to this book puts the following question: 'and what of the future?  Conscientious objection movements have often been inspired by the old expression 'imagine if there was a war and no one showed up?'.  Well, soon perhaps hardly anyone will need to show up for there to be a war, as technology 'advances' and can do the killing of 1,000 armed people at the touch of a button.  Increasingly, professional armies using remote control weapons, private security firms and robots have taken over from the mass armies of the mid 21st century.  Yet even with these 'advances', you still need people to wage war. Those people are increasingly not members of the armed forces however, but instead the 'civilian' branches of the supply chains for weapons and the militarism that make war inevitable.  This opens up whole new vistas of people who might resist war and their part in it.

War profiteering is explained with the military economy cycle which is based - as is most sectors of the economy - on neoliberal logic, the free market, privatization and reduction of regulations. It causes attitudes strictly related to personal enrichment and maximizing the economic benefit in the defense industry, forming the so-called neoliberal militarism. Moreover war profiteering goes beyond arms and defense sector. War needs lots of resources, not only weapons and armies, also logistics, transport, food, cleaning, translation services and private security. There are also wars for greed, which is not only power but also resources: oil, coltan, diamonds and whatever can be bought and sold in a market. Economic profits are part of war and wars are also made for profit.