Handbook for Nonviolent Campaigns in French 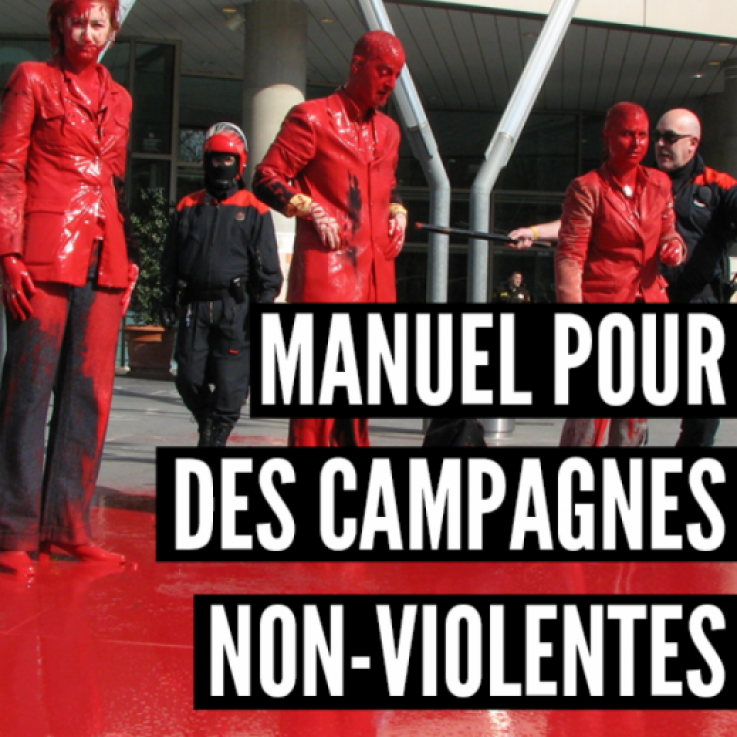 WRI's Handbook for Nonviolent Campaigns is now available in French! The translation was completed by friends at the Union Pacifiste de France, collaborating with WRI staff on the design work – to get a copy of the book, please email andrew@wri-irg.org.

When we think of social change, we often think of protests, campaigns, and direct action. These are all vital ways to say “no!” to destructive practices and institutions.

However, it's equally important that we are building concrete alternatives, where we say “yes!” to the vision of the world we want. Built on the same power analysis as our nonviolent direct action, “constructive programmes” can be powerful acts of resistance. Constructive programmes demonstrate the radical alternatives – to militarism and the causes of climate change, for example – that our world desperately needs, and puts them into practise in the here and now.

For Gandhi, a nonviolent revolution without a constructive programme was impossible; direct action and social change had to be embedded in empowered and vibrant communities that were bringing their own radical and egalitarian visions of life. Along with protest and direct action, he called for communities in India to start building the world they wanted to see, to build a new world in the shell of the old.

We have just published the most recent edition of the Broken Rifle, WRI's magazine. This edition focused on the relationships between the antimilitiarist and environmental movements, at a time when the impacts of climate change are starting to be felt, and world leaders turn towards militarised solutions. The magazine featured articles from WoMin, an African gender and extractives alliance, on the way both movements can converge on conversion, and the way responses to climate change are being militarised.

The full magazine can be read on our website here: /en/epublish/21/695 and the magazine version can be found on Issuu here: https://issuu.com/warresistersint/docs/design

War Resisters' International is a network of activists and activist organisations, and we want our newsletters to reflect this; we don't just bemoan the state of the world as it is, we actively try to change it. We hope our newsletters highlight the work being done by activists around the world. We welcome work by seasoned writer-activists, and those telling their story for the first time.

Two books for the price of one! 2nd October is 'International day of Nonviolence', so until the 9th October, if you buy a copy of the 2nd edition of the Handbook for Nonviolent Campaigns, we'll include a copy of the first edition to pass on to a friend! Both editions are available in English and Spanish.

In 2009, War Resisters' International released the 'Handbook for Nonviolent Campaigns'; a toolbox of ideas and resources to support activists to run more effective campaigns. The full first edition is available online here: www.wri-irg.org/pubs/NonviolenceHandbook. The original was translated into over ten languages, including Spanish, German, Tigrinya (spoken in Eritrea), Nepalese, Turkish, and Arabic, and has been used by activists all over the world.

Second edition of the Handbook for Nonviolent Campaigns is launched!

The new handbook is available from the WRI webshop, here:

At the 'Small Actions, Big Movements' conference in South Africa, War Resisters' International released the new edition of the 'Handbook for Nonviolent Campaigns'. At a launch event, different contributors read from the handbook, described the inspiration behind creating a new edition, and explained their various contributions.

The handbook aims to show how a group can achieve their goals by developing a strategy (a plan as to how they will exert the necessary pressure to make change), before exploring what strategy looks like in reality. The handbook was written by over 30 people from countries all over the world, and aims to reflect and empower nonviolent activists internationally.

Back to the Contents of the book

WRI's Countering the Militarisation of Youth project - http://wri-irg.org/programmes/militarisationofyouth (our forthcoming website of short articles, visual, audio, and other resources documenting the militarisation of youth around the world and sharing ideas on how to challenge it, will be linked to from here)

The processes and techniques which can be found below show/ prove that even in large groups of hundreds and thousands of people, it is possible to make decisions in a democratic, horizontal, participative manner, without hierarchy, delegations, hierarchies or votes/ voting.

To research deployments you need:

http://www.nato.int/cps/en/natolive/nato_countries.htm - an overview of links to the MoD of the NATO countries

New York – June 4 – Journalists and activists have launched a new website, called Waging Nonviolence (http://wagingnonviolence.org), that provides news, analysis, and original reporting on the use of nonviolence by ordinary people around the world in their struggle for justice.

War is a crime against humanity: The Story of War Resisters’ International

Buy this book at the WRI webshop.