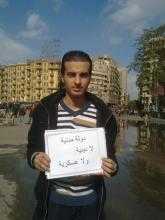 In the case of imprisoned pacifist blogger Maikel Nabil Sanad, the military court on 27 November again adjourned the trial, this time until 4 December, to hear a new prosecution witness. At the hearing on 27 November, Maikel Nabil Sanad's internet provider TE Data told the prosecution that they would not be able to provide the court with the information requested, and that the military should have requested that the internet company monitor the blogger's activity prior to arrest.

At the hearing on 13 November, the case was adjourned to 27 November, to wait for the report of the internet service provider. Meanwhile, Maikel Nabil Sanad passed the 97th day of his hunger strike, surviving on fruit and dairy juices.

As a result of growing pressure, the appeal hearing was finally brought forward to 4 October, but then again adjourned, because a file was missing. On 11 October, the military appeal court declared the original sentence of 10 April 2011 "null and void", but failed to release Maikel Nabil Sanad.

The case has now been adjourned to 4 December, and Maikel Nabil Sanad remains imprisoned and on hunger strike.